What’s In a Pronoun?

California Judge Zeke Zeidler recently added the following to his email signature: “Pronouns: He/Him/His.” Here’s why inclusion of pronouns is a simple action that will help quicken acceptance of transgender and gender queer/non-binary individuals.

While varying sexual orientations have gained broad acceptance, varying gender identities have not. As a cisgender person (a person whose gender is in alignment with the sex that was assigned at birth), I had not thought about why it was important for me to identify the pronouns that I use.

For a transgender person who is transitioning at work and only a few people know about it, sharing pronouns may “out” them before they are ready. For a gender queer/nonbinary person, sharing “they/them/theirs” pronouns may provoke a lengthier, personal conversation rather than simply inform people of their gender identity.

Cisgender people can be part of the understanding and acceptance of varying gender identities by sharing their pronouns. It normalizes the differences, has little risk, and can make for a more welcoming and safer environment for everyone.

I hope you will consider joining me and sharing your pronouns in your email signatures and elsewhere. It’s a small step that may have a big impact. 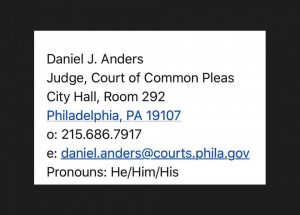