Transgender Judge Takes the Bench as Gender Issues Heat Up 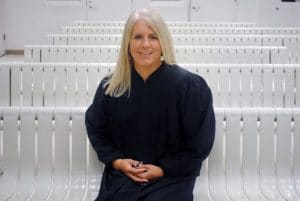 October 26, 2018 (Arizona Capitol Times)—Tracey Nadzieja never wanted to be the story. She spent decades trying to hide herself from everyone around her, terrified that they may one day learn the truth and she would lose everything.

But she was thrust into the spotlight on October 12 when she took an oath as a commissioner of the Maricopa County Superior Court. At that moment, she became the first known transgender judge in Arizona. According to the Southern Arizona Gender Alliance, she’s just the third in the country.

Sitting down with the Arizona Capitol Times to talk about the historic moment was not easy, she said. She never set out to make history.

“That’s the weird thing about doing this. Yes, I’m the first, and that’s a story,” Nadzieja said. “But on the other hand, what I had basically hoped going into this job is that people won’t see that part of the story. That the whole transgender part of the story will ultimately become an absolute non-issue. That people will just see me as somebody who is competent, fair, dedicated and just like anybody else.”

Nadzieja ultimately accepted the attention for the people struggling with their own experiences who need to hear that they can be like anyone else. She wanted them to know that they can have the lives they want.

“There is a tomorrow, and tomorrow’s going to be better than yesterday,” she said.

That message comes at a time when the transgender community across the country feels attacked.

As first reported by The New York Times on October 21, President Trump’s administration is crafting a legal definition of gender as either male or female, unchangeable and determined by a person’s genitals at birth. Any dispute about one’s sex would have to be clarified through genetic testing, according to the Times’ account of a Department of Health and Human Services memo the newspaper obtained.

According to the Times, that would essentially define an estimated 1.4 million Americans “out of existence” in federal law.   Nadzieja would be among them.

The federal department acknowledged months ago that it was working to rewrite a rule that bars discrimination in health care based on “gender identity.” It cited a Texas-based federal judge’s opinion that the original rule went too far in concluding that discrimination based on gender identity is a form of sex discrimination, which is forbidden by civil rights laws. The proposal would need to be signed off by the departments of Justice, Labor and Education, which are also involved with civil rights enforcement.

Phoenix Pride called the Trump administration’s move “an example of the worst kind of bigotry,” and “any attempt to curtail [transgender individuals’] rights to live, work and exist in our communities is an attack on both basic decency and against the rights that all people cherish to live as they are, free from marginalization by society and the laws that govern it.”

Nadzieja’s decision to apply for the commissionership came months before the Times report. It was not political in any way, she said. She wasn’t out to make a grand statement about state or federal law. It wasn’t about “us versus them.” She described herself as apolitical.

She applied because she wanted to use her education and legal experience to help people beyond the civil practice she had built over 25 years.

She spent the first 23 years of that as Tom. She came out to her law partners as Tom, transitioning slowly over time. Applying to be a commissioner was just the next step in her life, except she did it as Tracey.

Nadzieja’s first assignment as commissioner is in the criminal division of the Maricopa County Superior Court, presiding over proceedings in which recently arrested defendants see a judge for the first time.

She sits in the stark white courtroom at the Fourth Avenue Jail for seven days on, seven days off. The court is open 24 hours, seven days a week, 365 days a year. She’s often not only the defendants’ first contact with the justice system but also with a transgender person.

And if a byproduct of her serving in that role is that defendants walk away understanding she’s a person just like them, great, she said. It’s a humanizing experience, albeit in an odd setting.

She’s not going to fool herself into thinking everyone who reads about her will feel uplifted. But those people just haven’t met her, she said. She said she hopes people can see this as a step forward – then just let her do her job.

“This transcends everything,” Nadzieja said. “It transcends age, race, religion, politics, whatever. This has nothing to do with politics.”

This is her life. That’s it.  “I just wanted to be seen as any other woman,” Nadzieja said. “I didn’t want to stick out.”

Brianna Westbrook gets that.

Westbrook was a Democratic candidate in the February special primary election for Arizona’s 8th Congressional District. She ultimately lost to Hiral Tipirneni, but not before claiming 40 percent of the vote despite being heavily outspent. She also ran in the August primary for the Legislative District 22 state Senate seat, but fell to Wendy Garcia.

She said she never made her identity as a transgender woman a focal point of her campaigns. Like Nadzieja, she wanted to win because of her qualifications, not her identity.

But unlike Nadzieja, Westbrook is not afraid to get political.  She said the timing of Nadzieja’s appointment was perfect. Transgender rights are being ripped away, she said, and accomplishments like hers are making the community more visible.

She said the current state of politics is making that more difficult.  For example, she said the Trump administration rescinded rights for transgender children in public schools.

The U.S. Department of Education in February confirmed it would no longer investigate civil rights complaints from transgender students who couldn’t use school bathrooms that matched their gender identity. Education Secretary Betsy DeVos and Attorney General Jeff Sessions argued Title IX, which provides protections against gender discrimination, did not require schools to allow transgender students to use the bathrooms of their choice even though students had argued doing so was key to their safety.

And on October 24, Bloomberg Law reported that the Justice Department filed a brief with the U.S. Supreme Court arguing businesses can discriminate against workers based on their gender identity. According to Solicitor General Noel Francisco, Title VII barring workplace discrimination does not cover transgender bias.

Westbrook said Arizona hasn’t been much better. The state has made some progress, but she said it’s not enough.

She referred back to ongoing challenges for younger members of the transgender community in public schools. She said there are only “muffled” conversations in sex education, for instance, preventing kids from learning safe sex practices or from better understanding themselves alongside their teachers and peers.

She said that can change as more transgender people step into the public eye. Their trans-ness doesn’t have to be a talking point, she said. Simply being present in the conversation is enough to remind others that they are there.

Nadzieja may not have explicitly sought out her place in that conversation, but she’s not turning back now.

Nadzieja first came out to her wife after 15 years of marriage. It was the first time she ever really faced that fear head on. Would she be kicked out of her house? Would she be kept away from her children? Would she lose it all?

Her life did not fall apart. She flourished and moved on to share that part of her life with her law practice, her friends at her 30th high school reunion and now the state.

“People take for granted when they wake up in the morning and they look in the mirror… and the person staring back at them, that is the person they are. I never had that in my whole life,” Nadzieja said. “I have now had a taste of life, of what life was meant to be, I now know what that feels like, and I can’t go back.”