Tennessee Judge Rachel Bell Got Married and Came Out

POSTED ON September 3, 2018 In Member Spotlight

June 3, 2018 (Out & About Nashville)—Davidson County General Sessions Court Judge Rachel L. Bell married Dorsha James, an emergency room doctor, this past February in a small, intimate ceremony. The two knew they would host a larger, more public event in June because, in doing so, Bell became the first judge on her court—and in all likelihood the first elected judge in Tennessee history—to come out openly as LGBT. 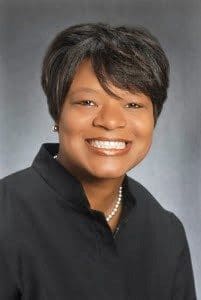 Judge Bell is very aware that, in so doing, she opens her private life to public scrutiny. But for the right woman, she said, it’s all worth it. “One of the reasons I waited so long,” Bell said, “or rather God made me wait so long, is I just had to meet the right person that I would be comfortable with in my skin…”

As far as her orientation, Bell says she’s always had certain feelings, though she didn’t always understand them. “When I was a little girl I asked my mom about it. I think I was about 10 years old and I don’t think she really understood because in her mind little girls or women always hold each other’s hand, always hugging on each other. So she told me my feelings were not a big deal, it’s just normal. She said, ‘When you grow up, you get married, and you have children, and you act on feelings with a man, but girls are always touchy-feely, holding hands and whatever.’ So it wasn’t until law school that I realized I had some feelings that I didn’t really understand. Maybe I suppressed them for a long time because I didn’t know what they were….”

It was then, in law school, that she began to come to grips with what her feelings meant, but then came face-to-face with the thought that her feelings were sinful. “I talked to my parents about it,” Bell said, “and they confirmed that it was sinful and wasn’t proper and that I shouldn’t do so. Then my pastor at the church confirmed with me that it was sinful… For years, I was trying to avoid my feelings or suppress them. I was open to love and had dated guys in high school, and college … but I knew that I had feelings that would come back.”

Dorsha James, it turns out, was the one who made that all necessary. The two had crossed paths socially many times, but when they finally got together it all clicked. “We’ve been inseparable ever since. It’s been amazing. We dated for a while, and then we got married this past February in a  very small, intimate wedding with our parents and sisters and brothers and very few friends. We had a reception at the Standard that night.”

This weekend though, the couple is celebrating their marriage publicly. “We were trying to figure out how that was going to look like Friday night… It’s a night written in the stars. We’ll show the wedding video, and we’ll do a ceremony and have some toasts. A proclamation from Mayor Barry, to my understanding, will be read and some other things…”

“Then, Saturday night, we have an event called the Love Fest,” she added. “It’s the inaugural Love Fest, we plan on doing it every year. The reason we came up with this one was because in the black community especially, we have a lot of events that we go to, a lot of galas, and they’re really nice, but if we want to dance with each other, it’s uncomfortable,” she added. “We wanted to create an environment where there would be people from all walks of life, people that identify, don’t identify, people that are open to love, and people that are LGBT-friendly, to come together.”