Marcy Kahn, who has been a prosecutor, a law firm partner, a criminal judge and an appellate justice over a 30-year career, will retire from the First Department in September to become an advocate on climate change, sustainable development, human rights and the rule of law. 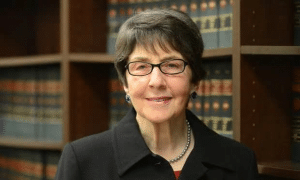 Her departure will leave the First Department four judges short unless Gov. Andrew Cuomo makes his judicial selections before the fall. A fifth vacancy will be created when Justice John Sweeny Jr. retires at the end of the year.

In 1987, Mayor Ed Koch appointed Kahn to the bench in Bronx County, making her the first openly lesbian judge in the New York City Criminal Court.

“I thought being a trial judge was the greatest job, at least for someone like me,” she said in a recent interview. “It was filled with intellectual challenges. You just have to venture out and do it yourself. And for a people person like me, you get to be with the people.”

It was the people skills that she relied on right from the start. Kahn’s advocacy in the early days of the AIDS epidemic launched her into prominence. This was the beginning of the 1980s when AIDS was a much-feared and widely misunderstood disease. Sufferers didn’t have the powerful medications they rely on today, and people in the prime of their lives were dying.

“We were all going to funerals—two or three a month—of our friends then who were in their 30s and 40s and 50s, and so we were desperate,” she says. Misinformation about how the virus spread ran rampant, and court officers feared that they could contract the disease by escorting anyone who had it.

“It’s as if they were somehow lepers,” said Acting Supreme Court Justice Curtis Farber, whose first appearance as a young prosecutor was before Kahn. “Judge Kahn demanded that they be treated like anyone else. She just wanted to make sure that the people who appeared before her understood they were not statistics.”

Farber, who said the judge inspired him to be open about his own sexual orientation, noted that she didn’t discuss her private life on the bench. “I would never say that she threw it out there that she is a gay judge. I don’t think she’s ever once said it in the courtroom setting,” he said.

But outside of the courtroom, she was very much an activist. In the early 1980s, Kahn, then a partner at Anderson Kill & Olick, helped form a coalition that brought together 50 gay organizations with different agendas.

At the time, the only place where the community could gather was a gay bar, and no medical or legal services were tailored to their needs. The nonprofit’s first task was convincing the city’s Board of Estimate to sell it a building for use as a community center. As the primary advocate for the coalition, Kahn convinced the board to acquiesce.

The consent sent the fledgling organization into a flurry of activity, raising $150,000 in three weeks to buy the structure. That was a sizable sum for a grassroots organization in those days. The building, now The Lesbian, Gay, Bisexual & Transgender Community Center on W. 13th Street remains a focal point for activism today.

Matthew Skinner, executive director of the Richard C. Failla LGBTQ Commission of the New York State Courts, which Kahn co-chairs, marvels when he hears the judge reminisce about the early days of the community’s fight for recognition.

“There’s just so much history contained within her. How much they accomplished, starting from scratch, giving this community the infrastructure it needed to protect itself and grow and become a force,” he said.

This wouldn’t be the only time that Kahn was called upon to represent marginalized communities. She had taken an interest in Native American rights while at New York University School of Law and had initiated a course on the subject. So when, in 2003, Chief Judge Judith Kaye asked her to chair the state’s newly-formed Federal-State-Tribal Courts and Indian Nations Justice Forum, she readily agreed.

Three years later and then again in 2016, she brought federal, state and native justice officials together to listen to each other’s concerns. She developed a pretrial native release program in state courts that was the first in the nation and convinced the administrative board of the courts to recognize the judgments of tribal courts.

When asked to name some of her most-important decisions, it wasn’t surprising that she included People v. Phillips 14 Misc. 3d 1221 (N.Y. Misc. 2007), a Manhattan Supreme Court case. James Phillips was convicted of attempted murder of his estranged wife in the lobby of her building. He suffered from transcortical motor aphasia, a rare condition that causes speech and motor impairments. The judge was concerned about his ability to receive a fair trial and came up with a series of accommodations to be sure the defendant would comprehend the case against him.

While a jury did convict him in 2006, the judge determined that he had received a fair trial, and the appellate division and the Court of Appeals affirmed.

As far as what’s next, Kahn said she wasn’t ready to make an announcement but did mention topics such as human rights, climate change and sustainable development that had sustained her throughout her career.

“I’m really just wanting to have an opportunity to do certain things, particularly policy advocacy, work where I might be able to make some contribution,” she said.