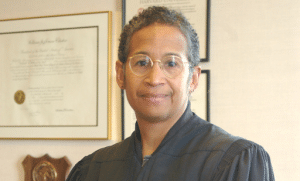 In June 1994, Batts was sworn in after a smooth confirmation process following her appointment to the bench by President Bill Clinton. During her confirmation proceedings, it was never mentioned that she was a lesbian.

But, at that time, she told the New York Law Journal that she did not want to be known as the “gay judge.”

“Deborah Batts was a trailblazer in every respect: an openly gay African-American woman who became a United States District Judge after a distinguished career as a federal prosecutor and law professor,” Chief Judge Colleen McMahon said in a statement. “It will be difficult to replace her. Our hearts are broken at her premature passing.”

McMahon said one of the judge’s greatest contributions to the court was her last, when she provided oversight to a unique program that enabled people convicted of crimes to earn reductions in their period of supervised release by participating in a special rehabilitative program under intense judicial supervision.

“She will be remembered by her colleagues for her devotion to the work of the court, for her mentorship of a cadre of young lawyers of all backgrounds, and for her infectious smile and extraordinary collegiality,” McMahon said.

Alphonso David, president of the Human Rights Campaign, said in a tweet that he was “Saddened to hear of the passing of Deborah Batts, a giant of the legal community who blazed new trails for justice and equality.”

He called it a “major loss for our judiciary and our movement.”

Batts received her undergraduate degree from Radcliffe College in 1969 before graduating from Harvard Law School in 1972. She worked at Cravath Swaine & Moore before joining the U.S. attorney’s office in 1979.

In 1984, she joined the faculty at Fordham University School of Law, becoming a tenured professor in 1990.