June 17, 2019 (2Civility) — In recognition of Pride month, the Illinois Supreme Court Commission on Professionalism (Commission) featured biographies of LGBTQ+ legal professionals who have promoted a culture of civility and inclusion within the Illinois legal community. 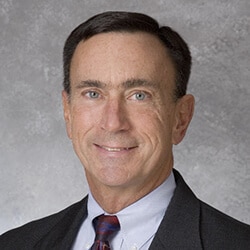 Thomas Chiola, 67, grew up in Springfield, Ill. As a self-described “all-American boy,” Chiola was the Springfield High School’s “Senior of the Year” in 1970. In 1993, Chiola returned to Springfield to give a speech at an awards banquet. It was here that he publicly came out for the first time. After high school, Chiola went on to Illinois State University. He then attended law school at the University of Illinois Urbana-Champaign.

In his first two years after law school, Chiola worked for the Illinois Environmental Protection Agency. He then spent five years prosecuting environmental cases for the Illinois Attorney General. After working in private practice for a few years, Chiola became the chief administrative law judge for the Illinois Department of Professional Regulations. He worked in this position for over six years.

In the early 1990s, Chiola began his campaign to become a Cook County Circuit Court judge. Chiola recounted during a Windy City Times interview that the campaign was “exciting because of how we were running [it]. The “i” in my name was dotted with a pink triangle that was sort of a badge of honor. People knew where it came from and it stood for not backing down. It reminded people that we’d never go back.”

Chiola built his judicial race off the efforts of earlier gay candidates and had strong support from the Democratic party. He eventually earned the support of almost all Democratic Ward Committeemen in his constituency. Throughout his campaign, Chiola tried to not only speak to the LGBTQ+ community, but to also reach out to neighborhood associations, organizations serving the elderly, and African American and Asian American groups.

In 1994, Chiola made history by being elected a Cook County Circuit Court judge. This election made him the first openly gay candidate elected to public office in Illinois. Shortly before his retirement, Chiola and 14 other LGBTQ+ judges formed the Alliance of Illinois Judges. Their goal was to lobby other circuit court judges for the appointment of more gays and lesbians as associate judges, to mentor law students and encourage the state to extend judges’ pensions benefits to domestic partners. Chiola retired from the bench in 2010 after 16 years of service.

Outside of his career, Chiola had a significant impact on the LGBTQ+ community. Chiola aided in passing the Cook County Human Rights Ordinance in 1993, a measure designed to protect all people in Cook County from discrimination and sexual harassment. He was also a board member of IMPACT, a Chicago gay and lesbian political action committee. While he was a board member, he worked to pass sexual orientation-based non-discrimination laws.

Throughout his life, Chiola was also involved in the HIV/AIDS community. Chiola learned while volunteering as an attorney for the Legal Clinic for the Disabled that HIV/AIDS patients were being denied advice. To remedy the situation, Chiola helped start a volunteer legal clinic at Howard Brown Health Center that provided legal services to patients that had no other options. He was also a volunteer driver for Vital Bridges, a meals on wheels program for people with AIDS, and an active fundraiser for Lambda Legal and the NAMES project.

In 1998, Chiola was inducted into the Chicago LGBT Hall of Fame. Additionally, in 2006, The John Marshall Law School honored him with a Judicial Leadership Award.